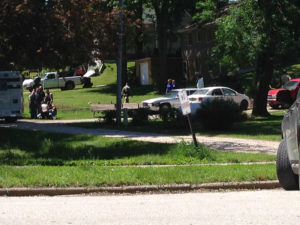 A man wanted on warrants was arrested at this Westside home after a standoff with police.

A standoff situation with a man wanted on federal search warrants was resolved with no injuries in Westside today.

At approximately 7 A.M., the Iowa State Patrol Area B Tactical Team assisted the Division of Narcotic Enforcement (DNE) and Crawford County Sheriff’s Office in serving the warrant at 315 Eagle Street.

The man barricaded himself inside the home and refused to surrender himself to the authorities. After several hours of trying to convince the man to come out, law enforcement used chemical munitions to resolve the situation.

The suspect was taken into custody at approximately 11:30 a.m. The name of the suspect has not yet been released.