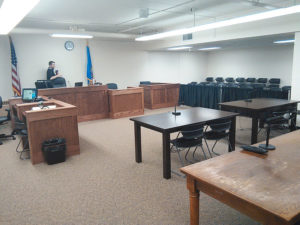 The lawsuit claims ABC News and reporter Jim Avila damaged BPI by referring in news reports back in 2012 to the company’s lean finely textured beef as “pink slime”.

BPI blames the coverage for a loss in sales which led to the closing of three processing plants — including one in Waterloo — and loss of 700 jobs.

She says the attorneys are questioning the jurors about questionnaires they filled out a couple of weeks ago. Allison says a total of 409 potential jurors has been summoned for the case. Several people were dismissed from consideration the first day for a variety of reasons:

“In general somebody would be excused for cause for a medical condition that would impact, I’m sure sitting on a jury for two months would be a financial hardship on most people. And then if people have strong biases and don’t believe they could be impartial,” Allison says.

Twelve jurors and four alternates will be chosen from that pool with selection expected to last at least through Friday in Union County District Court. Opening statements and presentation of evidence would start at 8:30 A.M. on Monday, June 5th.

The trial is expected to last nearly two months.BPI, which blames the coverage for a loss in sales which led to the closing of three processing plants and loss of 700 jobs, is seeking $1.2 billion in damages