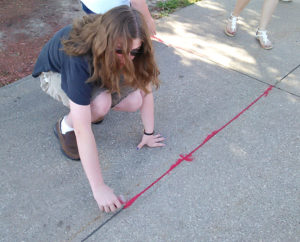 A student puts red sand into the cracks of the sidewalk.

Sophomore Sara Waldner organized the school’s participation in the “Red Sand Project” with the Siouxland Coalition Against Human Trafficking.

“I was just amazed that people can do this to each other,” Waldner says, “How do you lose the humanity in you to sell someone for your own profit? Or sexually abuse or sell your own child for money.” The red sand was placed in the cracks of the school sidewalk. 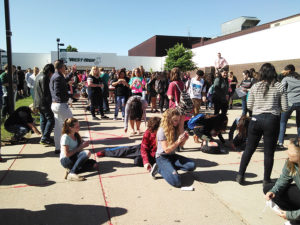 Students putting red sand in cracks of the sidewalk outside the high school.

“The red sand (represents) not letting anyone slip through the cracks. No one’s ever forgotten if they’re trafficked, and everyone has worth,” she explains. Waldner says it’s important to let the students know about the problem.

“I wanted to do it in the high school because the average age to be picked up by a trafficker is 11 to 14. And one in four runaways are picked up within 48 hours here — which is very, very terrifying — that’s a lot of numbers,” Waldner.

Some 700 students participated in the event. For more information, go online to: redsandproject.org.