You are here: Home / News / Iowa GOP to mark start of Reynolds’ tenure with sold-out fundraiser 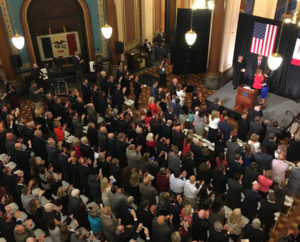 Kim Reynolds being sworn in as governor at the Iowa State Capitol rotunda.

The Iowa Republican Party is hosting a fundraiser Friday, billed as an unofficial “inaugural” celebration for Governor Kim Reynolds.

Reynolds was sworn into office last week after Terry Branstad resigned and took the oath to be a U.S. Ambassador. Wapello County Republican Party chairwoman Trudy Caviness has been waiting to mark this “new era” in Iowa politics.

“Because it took such a long process for Governor Branstad to be confirmed as ambassador to China, it’s been like waiting for Christmas to happen,” Caviness told Radio Iowa. “It’s bittersweet with Governor Brastad leaving, but it’s something that’s exciting and new.”

Caviness has a ticket for tomorrow night’s party in Des Moines. Caviness has been involved in Republican Party politics since 1966 and she’s been chairwoman of Wapello County Republicans for 20 years. Caviness said Reynolds will get the support of a “healthy” party structure when she runs for a full term as governor in 2018.

“The regional political directors, not just for campaigns but ongoing, like a permanent position, has helped build the grassroots,” Caviness said. “The county parties now have someone to communicate with all the time and that just helps build the base.”

Tickets to tomorrow night’s party fundraiser in Des Moines to mark the start of Governor Reynolds’ tenure are $75 each. According to the online ordering form, the event is now sold out. It’s being staged at a hotel ballroom in Des Moines and guests are advised the attire is “black tie optional.”

That means tuxedos and suits for men and either full-length or cocktail dresses for women.