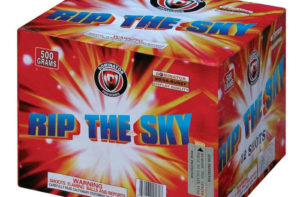 One of the products shown on the Bellino website.

Today is the first day fireworks may legally be sold in Iowa, but many retailers are waiting until later in the month to start selling bottle rockets, Roman candles, and other “consumer-grade” fireworks.

A fireworks business based in Nebraska plans to open 55 temporary locations in Iowa to sell fireworks three weeks from now.

“We are based out of Omaha, so we will have a good mixture in the western part of Iowa, but we will have locations in the Des Moines area, Ames, Cedar Rapids, Davenport, Dubuque, Keokuk, Mason City,” Bellino says, “so we’ll be all over the state.”

Bellino says his business has “partnered” with HyVee and Fareway and some of their temporary fireworks sales locations will be near grocery stores.

The new Iowa law allows fireworks sales from now through July 8 in permanent structures. Sales from temporary structures, like tents, may begin June 13. Bellino expects to open his company’s fireworks stands as late as June 25. In Bellino’s home state of Nebraska, fireworks may be sold from tents over just a 10-day period compared to Iowa’s new 38-day period for summertime fireworks sales.

There’s another sales period in Iowa later in the year from December 10 through January 3, but fireworks sales may only be made from permanent structures then.