You are here: Home / News / Boone is the spot for party gatherings on Saturday 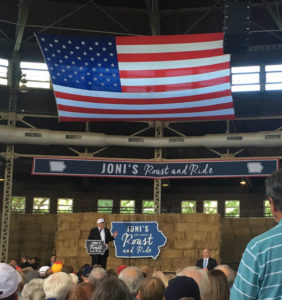 Boone, Iowa, will be a focal point for both major political parties on Saturday afternoon.

Vice President Mike Pence will speak to a crowd of Republicans at the third annual “Roast and Ride.” It’s a fundraiser for Senator Joni Ernst and it’ll be staged at the Central Iowa Expo grounds on the east side of Boone. Five miles to the west, Democrats will gather in a city park to hear from seven Democrats who say they are running or may run for governor.

Christopher Larimer, a political science professor at the University of Northern Iowa, expects the Democrats to lambast the Trump Administration.

“Ironically, you may hear the Democrats talking more about President Trump than at the Republican event,” Larimer says.

Tickets to the Ernst event are $20. Boone County Democrats are charging $10 for tickets to their event, which they’ve dubbed the “Picnic for the People.”

“Two important events for both political parties,” Larimer says. “The challenge, I think, is more on the Democratic side just to see what level of enthusiasm is there within the party.”

The presence of Pence at a major Iowa political event is a signal he’s positioning himself to be the country’s next Republican president. Larimer expects the former Indiana governor to use the appearance to sell himself to Iowa Caucus goers of the future.

“My guess is that Mike Pence will focus on Mike Pence, he’ll focus on Iowa, the election results in Iowa, maybe some things that were done in the legislative session even here in Iowa,” Larimer says, “and then focus on generally conservative ideas, Republican ideas moving forward.”

Senator Ernst told The Cedar Rapids Gazette it is “up to the Secret Service” to decide whether Pence will participate in the motorcycle ride that precedes barbeque in Boone.

Details about the Ernst fundraiser are here.

Details about the “Picnic for the People” organized by Boone County Democrats are here.