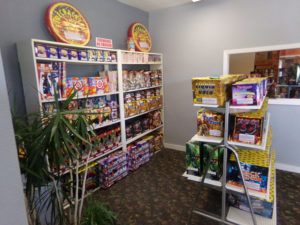 Fireworks on shelves at Flashing Thunder in Forest City.

The State Fire Marshal says a retailer in Forest City is the first to complete the process to get a license to sell fireworks in Iowa.

State Fire Marshal Jeffrey Quigle says some 600 people logged in to the website Thursday once they could start the process to get a license. His staff has been working to process all the requests.

“As of yesterday evening, we actually had 88 retailer licenses that are in process. And then we can further break that down to an actual 46 who have submitted site plans and were are in the process of reviewing,” Quigle says. Their goal is to complete a license application in three days. Quigle says they’ve been able to use software for the fireworks registration process that they already use for other things.

He says they already license sprinkle and fire alarm contractors, burglar alarm and nurse call contractors along with explosive blasters. “So we were able to build upon that licensing software. This is just a little bit different — we tried to make it totally online and eliminate paper,” Quigle says. He says they have also been getting hundreds of calls since the fireworks selling period began Thursday.

Quigle says they continue to update their website with information to help try and eliminate some of the phone calls, but he says they encourage anyone with questions to call, as he says they may be able to quickly answer the question. Quigle says those applying for licenses have done a good job of preparing their applications to follow the regulations posted online.

“We’ve seen a lot of people take time to read the two main chapters in that document which deal with both storage and then fireworks sales,” Quigle says. “..we’ve seen some really good site plans come in and we don’t have to call back and ask further questions, they are very, very good.”

There are four wholesalers from out-of-state who have applied to sell fireworks in Iowa. Quigle says they’ve had inquiries from all over the country and many from in-state as well.

“It’s kind of a vast array of different people that we are seeing that are selling fireworks,” Quigle says. Fireworks can be sold through July 8th. A second sales period is set for around the New Year’s holiday.