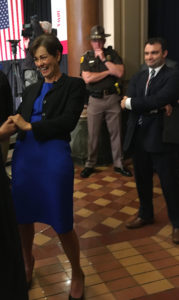 More than 1,300 people paid $75 for a ticket to stand in a Des Moines hotel ballroom tonight to salute Iowa’s new governor.

Lee County Republican Party chairman Martin Graber of Fort Madison was among the men clad in tuxedos and bow ties at the “Inaugural Celebration for Governor Kim Reynolds.”

“I’m very excited to come to the inaugural event for the first female governor,” Graber said.

“Tonight is an evening for breaking glass ceilings,” Kaufmann said. “Tonight is a night for us to come together and celebrate.” 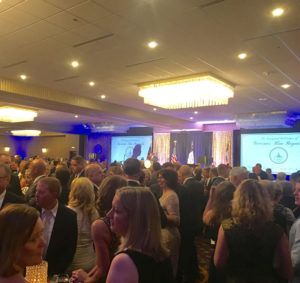 The crowd at the Inaugural.

Reynolds thanked Ernst, Iowa GOP leaders, her own family and the “cabinet” of staff she’s assembled.

“I just want to say what an honor it is to have the opportunity to serve you as the 43rd governor of this state,” Reynolds said. “I love Iowa and I love what it represents.”

Diane Stadtmueller of Monticello, a former co-chair of the Iowa Republican Party, first met Reynolds in 2010, when former Governor Terry Branstad chose Reynolds to be his lieutenant governor running mate.

“She just has so much energy. People have called her a cheerleader, but they don’t understand the real depth she has and the real background she has, being a treasurer, having served in the state legislature as well,” Stadtmueller said, “so she’s more multi-faceted than people give her credit for.”

Frank Hayer of Adel first met Reynolds more than a decade ago when she was the Clarke County Treasurer.

“You know, who would have thunk it? It’s beyond my imagination a little bit, but she was a good treasurer,” Hayer said, “no nonsense, no fooling around.”

Reynolds waded into the crowd after her brief speech, hugging party-goers and posing for countless smart phone photos. The event was a fundraiser for the Iowa Republican Party.