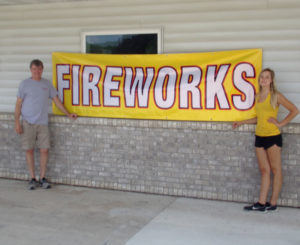 Tim Peterson and his daughter Marissa.

The first store to get a state license to sell fireworks is in Forest City.

Flashing Thunder is managed by Tim Peterson who routinely performs displays in the area for various events in the area. Peterson says getting approved to sell the fireworks to the public is a realization of a dream.

He says he has been shooting off fireworks for 30 years as a licensed pyrotech. Peterson says opening up a fireworks store has been a dream for some time.

“When they passed the bill a month or two ago, it answered my calling, is what I say.” The Forest City store is waiting on one last inspection after he and his daughter — who is helping to manage the shop — received permission from the state fire marshal. The store is will have all the legal pyrotechnics for sale. 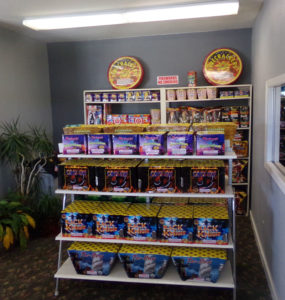 Fireworks in the Forest City store.

He says they will sell fireworks that can be used from kids on up to adults. Peterson and his daughter Marissa were one of four licenses applicators who were approved out of 46 filed to sell fireworks in the state.

Now the Flashing Thunder shop will have to wait on meeting all city requirements which could be decided as early as Monday by the city council.