You are here: Home / News / Reynolds defends use of gambling exec’s jet 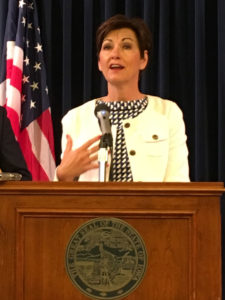 Governor Kim Reynolds says she double checked with the state Ethics Board about using a gambling industry executive’s private plane to fly around the state with her acting lieutenant governor.

The gift of the plane’s use is considered a donation to the governor’s campaign. Gary Kirke, the plane’s owner, is seeking a state license for a new gambling casino in Cedar Rapids. Kirke and his wife also are co-hosting a campaign fundraiser for Reynolds next week in Cedar Rapids.

Reynolds says the decision about a Cedar Rapids casino will be made by the Iowa Racing and Gaming Commission.

“I have not and will not weigh in on any of the casino licenses,” Reynolds says.

Cedar Rapids Mayor Ron Corbett is considering running against Reynolds for the GOP’s nomination for governor in 2018. Corbett told The Cedar Rapids Gazette it appears Reynolds may be getting “too cozy” with an executive who hopes to land a multi-million dollar casino. Democrats who hope to face-off against Reynolds next year are weighing in, too.

According to an @IAStartingLine tweet on Saturday, one Democrat at a candidate forum joked that none of the Democrats flew to the event in southern Iowa on a “corporate jet.”