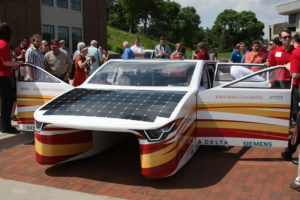 Iowa State University’s student-run Team PrISUm will taking part in an international solar car competition on the other side of the planet later this year.

Philip Gates, student-spokesman for the team, says they’ll be heading to Australia late this summer to prepare for the race in the fall.

“We’ll be sending about ten members of our team at the end of August and we’ll bring our newest car,” Gates says. “It’s a big milestone for Team PrISUm.”

The car is named Penumbra and it will be flown to to Darwin, Australia, to complete in the 2017 Bridgestone World Solar Challenge.

For one week in October, ISU students will race Penumbra across Australia with the goal of winning the prestigious race on just the energy of the sun. During the competition, members will be sleeping in the Outback as they cruise across the continent, from north to south.

“We’ve worked out with the Study Abroad office and a number of our professors that will be helping us not only travel to Australia and work with us there but allow us to take a few classes and still be receiving credit for this experience,” Gates says. The race runs more than 1,800 miles from Darwin in the Northern Territory to Adelaide in South Australia. The car has a top speed of 70 miles-an-hour, weigh about 850 pounds and can seat four people. It’s currently on a tour of Iowa over the next few weeks with stops planned in all 99 counties.