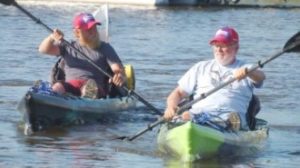 A father and son are spending their summer on the Mississippi River to raise awareness about veteran suicides. On Wednesday, Jeff and Logan Hastings paddled their kayaks into Dubuque, where they spoke with KCRG-TV. “Statistics say that over 22 veterans everyday commit suicide. That’s uncalled for and we want to do something to wake up our country and to help stop that,” Jeff Hastings said.

The Hastings operate a nonprofit organization called Warrior 180 Foundation. They travel around the country to help veterans who are experiencing suicidal thoughts and having a hard time adjusting to civilian life.

Jeff and Logan Hastings are both army vets. Logan served two combat tours in Iraq and Afghanistan. “I had many problems when I got back but luckily I had a good support group and I got help, so now I’m trying to return the favor that, you know, the guys helped me, now I want to help,” Logan told KCRG.

The father and son plan to travel over 2,300 miles in their journey to the Gulf of Mexico. Logan said it’s already been a grueling trip. “I’ve got sunburn and my arms and legs hurt,” Logan said. But, despite his sunburn and aching limbs, Logan says the journey is worth making as he and his father work to spread their message.

The Hastings say people who wish to donate to the cause can do so at their website.