You are here: Home / News / Motorists advised to be on the lookout for increased deer movement 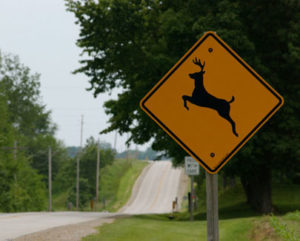 We are several months away from the fall harvest and the prime time to see deer on the move across roadways in the state.

“This is absolutely the second busiest time of the year for deer movements in Iowa, with the does getting ready to have their fawns. And actually a lot of them are already having their fawns — and they are looking for secluded places, and they are moving day and night right now,” Coffey says.

The rules for deer movement are much different this time of year than in the fall. “Typically with deer we always think of dawn and dusk as being the prime times for movement — but with does that are about ready to have their fawns — they are moving all day long any time it takes.,” Coffey explains. “They are moving out looking for secluded bedding areas for those young fawns.”

He says farmers are cutting hay right now too, and that pushes the deer out of those fields. “You are also going to start seeing a lot of fawns that are going to get cut up this time of year. They are going to get run through those hay binders — as well as pheasant nests and turkey nests that are out in those fields too,” Coffey says.

Coffey says newer and faster equipment makes it tougher on the animals that take refuge in a hay field. He says the hay conditioners used to have a flushing bar that would move animals out of the way. “But with today’s modern equipment, it moves pretty fast and is pretty involved. It’s not like the old days, that’s for sure,” Coffey says.

This is also the time of year where you might come upon a fawn that appears to be abandoned. Coffey says that’s not the case and you should avoid the temptation to take some kind of action. “The best way to help a fawn is to leave it alone,” according to Coffey. “the best defense a mother has is to have the fawn and leave it. And that fawn will sit very still, she’ll come back a couple of times a day to feed it. And then once it gets legs underneath of it and can it keep up with momma, then it will start moving. If you just find a fawn by itself, if you look closely, probably within a few hundred yards, there’s a female deer around.” Coffey says

The recent clear, warm days are enjoyed as much by the animals as they are by the people in Iowa. “This is the best time of year for all kinds of wildlife. A lot of birds are hatching, all of our ground birds, pheasants, quail, turkeys, they are all hatching right now. It’s going to be a very productive early part of the year,” Coffey says. “And what we really hope for are these dry, hot, warm days to get the nests off and to allow those fawns to survive.”

Coffey says you should be extra alert for the moving deer through the end of this month.