You are here: Home / News / ‘On the brink’ is how state treasurer describes State of Iowa’s finances 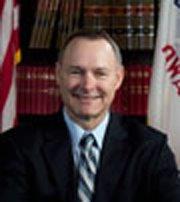 The state treasurer is “raising the red flag” about state government finances. Michael Fitzgerald said the state had to dip into cash reserves to pay all its bills in April.

“We have a serious issue here,” Fitzgerald told Radio Iowa. “Our financial condition has deteriorated tremendously.”

April is a significant month in the state’s fiscal year. The state must make its monthly payment to public schools and another $325 million or so to health care providers who treat Medicaid patients. In addition, April is the month the state is writing tax refund checks before all the state income taxes owed to the state are paid.

“We just squeaked by,” Fitzgerald said of state finances in April. “We came dangerously close to not being able to pay our bills on time.”

Fitzgerald, a Democrat who has been state treasurer since 1979, is asking Republican Governor Kim Reynolds to give her blessing to some “cash flow” borrowing. The state treasurer has the authority to sell short-term bonds to investors to raise money to cover cash flow problems.

“Our surplus has been wiped out,” Fitzgerald said. “Our reserve funds are being eaten into and the trend continues to slide.”

Fitzgerald said the state has engaged in cash flow borrowing “many times” in the past. He suggests issuing short-term state bonds in September.

“We’re on the brink of not being able to pay our bills on time,” Fitzgerald said. “…I’m raising the red flag.”

Governor Reynolds plans to meet with Republican legislative leaders soon to discuss the state’s troubling finances. The latest report from the non-partisan Legislative Services Agency indicates that over the last 11 months, state tax collections were $100 million below expectations. Reynolds says the numbers “fluctuate daily,” but she isn’t ruling out calling legislators back to Des Moines for a “special session” to enact a plan that ensures the state budget doesn’t slide into a deficit.

“We are one of the few states that are still seeing growth,” Reynolds told reporters Monday, “although it’s not at the rate that we had projected.”