You are here: Home / Education / Board of Regents executive director on resignation: ‘timing is right’ 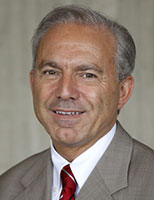 The outgoing executive director of the Iowa Board of Regents addressed the board for the final time Thursday. Robert Donley took the job in 2008 and said he never expected to stay in Iowa this long. “I jokingly say that I’m in the ninth year of my three year contract,” Donley said.

The 57-year-old Donley announced his resignation earlier this week, but plans to stay through July 15th to help with the transition to an interim director and to complete his duties as chairman of the State Higher Education Executive Officers.

Donley said now that the board is under new leadership, the “timing is right” to leave and he’s ready to be closer to family out east. “I plan on going on a very long vacation,” Donley said. Outside the meeting on the UNI campus in Cedar Falls, Donley told reporters he made the decision to resign several months ago and “no one should read anything other than that into this.”

The Iowa Legislature in 2008 capped the salary for the executive director at 154-thousand-300 dollars, but the Regents have at times paid Donley more than double that amount through performance bonuses. He will be paid 140-thousand dollars in a deferred compensation package on July 1st.

In his address before the board, Donley said he was proud of several initiatives he spearheaded that led to decreases in student debt, expanded online education, and increased graduation rates. “Iowa’s public universities now have…not only the highest high school graduation rate in the country, but we also have the highest degree completion rate in the country at about 80.7 percent,” Donley said.