You are here: Home / News / We’ve had the super moon, now it’s time for a mini-moon 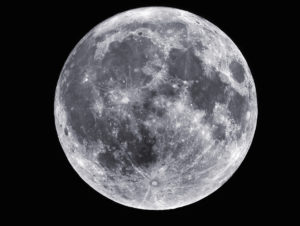 Some Iowans refer to the full moon in June as a “strawberry moon” because it’s often bright enough to go out at night and pick berries, but that will not be the case this year.

While we’ve had several so-called “super moons” in the past year, astronomer David Kriegler says what we’ll see tonight is just the opposite, what’s known as a micro-moon or mini-moon.

Kriegler says, “Because it’s farther from us, it will be fainter in its brightness when it’s full and it will also be smaller.” The moon’s orbit this month is much more distant from the earth than usual, so while the moon won’t actually be any smaller, it will appear so to the trained eye.

“The mini-moons occur fairly often, about once every year or year and a half,” he says. “You have a full moon which is close to its apogee. It’ll be about 30% smaller and probably 20% dimmer than normal.”

For dedicated sky gazers, this moon may be something of a letdown compared to the spectacular full moons we’ve seen lately.

Kriegler teaches physics and astronomy at the University of Nebraska-Omaha.