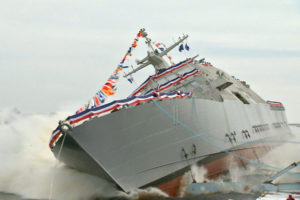 The city council in Sioux City has unanimously voted to spend $50,000 to help commission a new Navy vessel that will bear the city’s name.

“For demonstrating a relationship between a naval vessel, her crew and the namesake city,” said Chris McGowan of the Siouxland Chamber of Commerce.

The USS Sioux City will be launched in the summer of 2018 with a week-long celebration in Maryland. The Siouxland Chamber of Commerce president spoke at this week’s city council meeting in Sioux City.

“We have set a very high bar in this community…for supporting our military and I think this is another example of that and a great opportunity for us,” McGowan said.

The Sioux City airport is home to the Iowa Air National Guard’s refueling wing. The Air Guard has had a presence in Sioux City for decades.

The USS Sioux City will be launched from a port in Maryland next year. It has a titanium hull and nearly 100 sailors are expected to be assigned to the ship. The USS Sioux City is part of a class of vessels that will be deployed close to shore for combat and security missions.