You are here: Home / News / Heat wave to move up another notch Tuesday 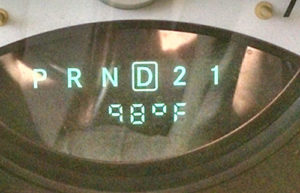 After a steamy weekend across Iowa, forecasters now say the worst is yet to come with this late spring heat wave. Meteorologist Allan Curtis, at the National Weather Service, says unseasonable high temperatures the past three days will be rising even higher tomorrow afternoon.

“Obviously, we’ve had the heat so far and Tuesday’s going to be the hottest going forward,” Curtis says. “Through much of the state, low to mid-90s. People in Des Moines could be looking at 95, 96, something of that nature. The rest of the week is still looking hot, low 90s.” While the daily heat index has been creeping into triple digits since Friday, no heat advisories or warnings have been issued — not yet.

“We are actually pretty close in many cases toward our advisory criteria and not so much our warning quite yet,” Curtis says. “It depends on, in part, have we had heat, a few days of it, is it really humid? What’s our heat index going to be? While we haven’t seen any yet, we’ve been close to the threshold. There’s a shot that we’ll see it tomorrow.” In addition to the high heat, there’s the possibility for severe weather late Tuesday.

“We do expect some storms certainly to fire off to our west tomorrow, mostly in the afternoon and evening,” Curtis says. “They’ll eventually work their way eastward across the state. For most people, it’s going to be evening/overnight hours. There’s absolutely the potential for severe weather, primarily wind and quarter-sized hail or so.” Oftentimes, big storms will be followed by a change in the weather but that won’t likely be the case this time.

“Unfortunately with this one, we’re not going to have a big cold front behind it,” Curtis says. “We’re still going to be in the upper 80s and lower 90s in most places to round out the week. It doesn’t look like we’ll see much relief temperature-wise until the latter half of the weekend, Saturday going into Sunday.” Iowa’s hot spot on Sunday was 95-degrees in Charles City. The normal high for this time of year is in the upper 70s to low 80s.