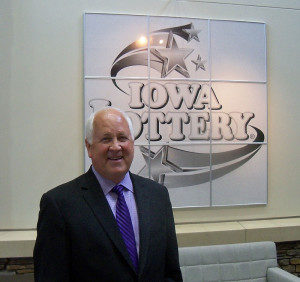 A computer specialist is pleading guilty to rigging lottery jackpots in Iowa and four other states — and he could serve up to 25 years in prison.

Eddie Tipton is the former security director of the Multi-State Lottery Association based in Urbandale. Tipton had maintained his innocence until today, when he pleaded guilty in Wisconsin to theft.

“I’m glad that he decided to put this in the past, for all of us,” Iowa Lottery CEO Terry Rich said.

Wisconsin’s attorney general announced it was a “multi-state” plea deal and Tipton will be pleading guilty to “ongoing criminal conduct” in Iowa as well. Rob Sand is the assistant Iowa Attorney General who’s been lead prosecutor on the case.

“It’s relatively unusual to have a multi-state plea agreement,” Sand said, “but this is one of those cases that is fairly unusual.”

Court documents posted online indicate Tipton has agreed to pay more than $2.2 million in restitution to lotteries in Iowa, Wisconsin, Colorado, Kansas and Oklahoma and the state of Colorado has agreed to drop its charges against Tipton.

“It was a heck of a case and we’re glad where we are at today, but we still have a few proceedings to go until we put it all to bed,” Rich said

On June 29, Tipton is scheduled to appear in an Iowa courtroom, where an Iowa judge will review the plea agreement. Sand said that means this isn’t quite a done deal yet.

Eddie Tipton had programmed the software used in the random number generator machines that picked winning numbers. His brother, Tommy Tipton, and a close friend from Texas were able to claim lottery prizes in four other states. Recently, the friend was sentenced to six months home confinement after pleading guilty and he agreed to testify against the brothers. Sand said it’s up to Eddie and Tommy Tipton to say whether that was the tipping point in this case, as Tommy Tipton is also pleading guilty to conspiracy to commit theft.

“In our perspective, we certainly were happy to have the cooperation of Robert Rhodes,” Sand said.

Eddie Tipton was caught on videotape at an Altoona convenience store in 2010, buying the ticket to a Hot Lotto jackpot. No one was ever able to claim that $16 million prize.

“The Iowa Lottery has many layers of security and the initial investigation was conducted by our staff,” Rich said. “The first call came in to our frontline staff and they said: ‘This just doesn’t feel right,’ and from the beginning, we knew something might be amiss.”

About two years ago, a jury found Eddie Tipton guilty of fraud, but he had appealed the conviction. Under Eddie Tipton’s plea agreement, that conviction will be removed from Eddie Tipton’s record if the Iowa Supreme Court doesn’t dismiss the case. His brother, according to the plea deal, will spend about 75 days in jail and pay more than $800,000 in restitution.