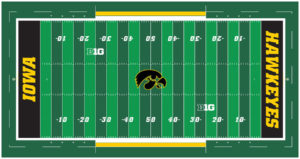 After a nearly 40 year absence a midfield logo will return to Iowa’s Kinnick Stadium for next football season.

Iowa officials unveiled plans to place a Tigerhawk on the playing surface for the upcoming season. It will be the first time Kinnick Stadium has featured a midfield logo since the 1980 season.

The Tigerhawk was developed by former football coach Hayden Fry and has served as the national brand logo for the Hawkeyes since 1979. It will debut on September 2nd when Iowa opens the 2017 season against Wyoming.