You are here: Home / News / DNR hears concerns about problems with leaves on Oak trees 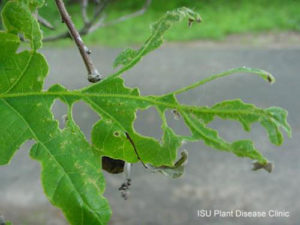 About a thousand Iowans contacted the Department of Natural Resources this spring with concerns about oak trees with damaged leaves — only the veins of the leaves remained.

DNR forester Mark Vitosh says it was likely caused by a type of herbicide used by corn and soybean farmers. Vitosh has known about the problem for 20 years, but weather patterns have made this a bad year for oak trees. He says the condition is called “oak tatters” and trees can usually recover from it.

“Our concern is, if this would happen in multiple years, year after year, that’s heavy defoliation,” Vitosh says. “It can cause stress which can induce other insects and other things to attack them.” Many callers thought insects or diseases were to blame, but Vitosh says he’s observed damaged oak leaves himself.

“In the spring when they were usually an inch to two inches long, the edges would turn purple and kind of whitish,” he says. “I come back seven days later and that tissue would be falling off. Insects don’t do that and diseases don’t do that.”

Vitosh says the DNR has seen oak tatters in rural and urban areas of the state. He made his comments on the Iowa Public Radio program “River to River.”