You are here: Home / Fires/Accidents/Disasters / Investigation underway after car crashes through Manchester restaurant 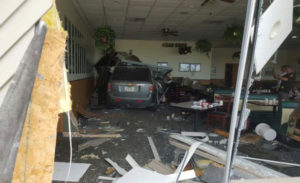 Police are trying to determine why this SUV ran into the Sunset Family Restaurant in Manchester.

Manchester police are trying to figure out why a car crashed into a local restaurant late Monday afternoon. Teresa Faulkner was across the street when she saw the SUV hit the Sunset Family Restaurant the first time.

She says it was halfway into the building and the driver backed out, then the driver put the car in drive and it went forward straight into the restaurant again. The car stopped inside the building towards the dining room’s south wall near the restrooms. Faulkner has this reaction.

“Scared me to death,” Faulkner says. There is a large hole in the front of the restaurant just to the west of the front door. Dining tables and chairs could be seen toppled, with broken glass everywhere. Restaurant owner Penka Ismaili didn’t see the accident — but did hear it.

“I was in the office in the back room and I heard a big boom,” Ismaili says, “at first I was so scared I didn’t know what it was. I thought the whole building was coming down. He then went to check on what happened.

He says he ran around and saw the roof was still there and someone told him what happened. Ismaili says he asked right away if anyone was sitting in the way when the car hit the building, and he says “Thank God nobody was sitting on that side.” Ismaili says he hopes to have the restaurant back open in two to three weeks. he says he’s

been getting lots of offers of help from regular customers. Manchester Police say no one was injured – just scrapes and bruises. They have not yet released the name of the driver. Police say the it may have been a vehicle malfunction, with a stuck accelerator. The investigation continues and more details are expected to be released later.