You are here: Home / Fires/Accidents/Disasters / New rules: pistols ‘yes’ but fireworks ‘no’ on state capitol grounds 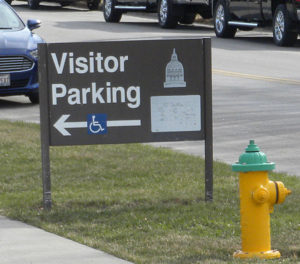 Fireworks will continue to be banned on the state capitol grounds in Des Moines.

Earlier this year, legislature voted to let Iowans buy and set off consumer-grade fireworks to celebrate around the 4th of July and at year’s end, but the director of the Iowa Department of Administrative Services has decided to retain the ban on bottle rockets, smoke bombs and other kinds of fireworks from the capitol grounds.

“If someone is injured on state grounds shooting fireworks, it definitely exposes the state to some liability,” Dave Heuton, the agency’s deputy director, told reporters for Radio Iowa and The Des Moines Register. “It’s definitely a fire hazard…Then, just in general, the public safety issue.”

In addition to the capitol building itself, a number of state-owned buildings as well as parking lots and a parking ramp occupy several blocks in the City of Des Moines. Heuton said fireworks have never been allowed in those spaces.

“Nor has an open flame or any of those things that could cause damage to property owned by the taxpayer,” Heuton said.

The ban on fireworks is included in new operating rules for the “capitol complex” that were approved by the legislature’s Administrative Rules Review Committee this afternoon. The new rules, as expected, also allow pistols and revolvers to be carried inside the state capitol building by people who have a permit to carry a concealed weapon. However, guns will not be allowed inside the nearby State Historical Building or other state office buildings.

The new state gun law that then-Governor Branstad approved in mid-April included a stipulation that guns be allowed inside the capitol. The new operating rules also will allow people with a concealed weapon permit to carry their pistol or revolver in the designated parking areas around the capitol building.