You are here: Home / News / No more cuts. Governor to use Emergency Fund to balance budget (AUDIO) 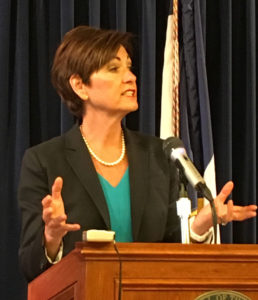 Governor Kim Reynolds plans to use money from the state’s “Economic Emergency Fund” to ensure the state budget is balanced when the books are officially closed on the current state fiscal year.

“The bottom line is this…there will be continuity of government and Iowans will experience no change from when the sun sets on June 30th to the morning of July 1st,” Reynolds told reporters late this morning.

Iowa governors have the authority to withdraw up to $50 million from the Economic Emergency Fund to cover red ink. Reynolds says if the shortfall is greater than $50 million, she’ll call legislators back to Des Moines for a “special session” to take steps to ensure the budget is balanced by September 30. State officials have until then to count any payments to the state that were due before June 30, but made late.

As for the spending side of the ledger, June 30 is the final day of the 2017 state budgeting year.

“It’s absolutely not realistic for us to do additional cuts,” Reynolds said.

And the governor said “right now” she has no plans to ask state workers to take unpaid days off in the final 17 days of the fiscal year.

State tax receipts were running about $100 million short of expectations through May 31. The governor told reporters tax receipts are “fluctuating” each day since. Reynolds indicated she’s been getting questions about the state’s financial predicament as she travels around Iowa.

“Folks are rightly concerned about the state budget and what it means to them,” Reynolds said.

Reynolds said the state will pay all its bills on time and that includes payments to public schools and health care institutions that provide care to Medicaid patients. She rejected the state treasurer’s call for short-term borrowing this fall to ensure the state can continue to pay its bills on time.

Reynolds, who is a Republican, said State Treasurer Michael Fitzgerald, who is a Democrat, has not talked with her or her staff about his short-term borrowing plan.