An initiative to help startup companies involved in agriculture was unveiled at last summer’s Farm Progress Show and now the Iowa AgriTech Accelerator has a permanent executive director. 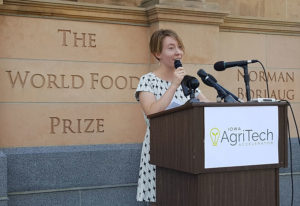 Megan Vollstedt has been at the Ames-based technology company Workiva the past six years. The company has gone from being a startup to becoming publicly traded.

“I have been in a startup experience from infancy to its growth…I know what it takes to be in a startup and the intense work it takes, and also how they are going to feel in working through these 100 days,” Vollstedt said.

She was introduced at a news conference Tuesday outside the World Food Prize headquarters in Des Moines. Several companies with ties to agriculture put up money for creation of the Iowa AgriTech Accelerator. Vollstedt identified the five companies that will be in AgriTech’s initial class. Two of the startups are based in California, while the other three are from Michigan, Missouri, and Minnesota.

“The chosen companies will receive intensive mentoring, $40,000 in seed funding, field trips to investor and mentor companies that will complement office time for holistic education, outreach, and network, and presentation opportunities,” Vollstedt said. The 100 days of coaching from some 60 volunteer mentors for the five startups will begin July 10 and a graduation ceremony will be part of the World Food Prize festivities on October 20. Vollstedt believes now is a good time for ag startups.