You are here: Home / Agriculture / Emerald ash borer now in half of all Iowa counties 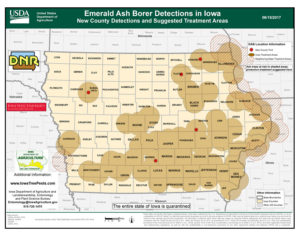 Five more counties are now confirmed to have emerald ash borer (EAB) infestations, putting the total at 50 of the 99 counties in the state which have the destructive pest.

Although it’s been making its way across the state for the last seven years, Kitner says people haven’t seemed to become complacent about watching for new infestations.

“Folks are concerned and keeping a watch on their trees and the emails and the phone calls are definitely living proof that people are keeping a watch,” Kitner says. He expects the remaining 44 counties which haven’t confirmed an infestation yet will be on the look out for the signs in their ash trees.

“Areas that have not had it yet, those are the areas that we are the most interested in finding out about, so we can bring it to the attention of the people in those counties, or where new finds are,” Kitner says. “Municipalities are doing a pretty good job on keeping a watch on their trees — because they know that it is coming.”

The insect that burrows under bark started its trip across the state in eastern Iowa, and he says the scars of its presence are visible.

He says the impact is pretty heavy for the counties which have experienced the infestation for the last four or five years. “You drive through those communities and the trees are looking quite rough,” according to Kitner, “in fact some of the municipalities have already began or have removed their ash trees.”

You can spot a tree that’s been attacked by leaves that begin dyeing at the top and move downward. There are D-shaped exit holes and water sprouts along the trunk and main branches, and bark that is stripped off as a result of woodpeckers hunting for EAB larvae. Some of the trees are being saved by various treatments. Kitner advises you to do a little research if you have a tree you want to treat.

“There’s a good publication that Iowa State puts out, PM2084. It is available online, it’s a great resource where you can go and look at what products are available and what times of year,” Kitner says. He says all 99 counties are eventually going to see an infestation, but you can help slow it down by keeping firewood local.

Moving firewood is the fastest way for the beetle to spread from one area of the state to another.