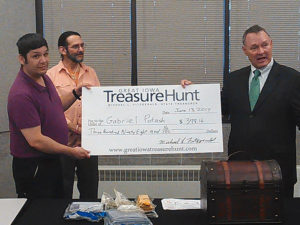 The Potash family receives a check and a coin collection from State Treasurer Mike Fitzgerald.

A coin collection lost to a Sioux City man for 47 years is back with its owner thanks to the Iowa Treasure Hunt.

The collection started by John Potash and his father was turned over to the state treasurer’s office as unclaimed property in the form of safe deposit box contents almost 15 years ago.

That was after the original bank changed owners and no rent had been paid on the deposit box for some years. Potash found the lost property by searching the state treasurer’s website,

Potash says he had given up on ever finding the coin collection, until one night when he couldn’t sleep and he went to the Iowa Treasure Hunt website and found his name a couple of times. “And it said ‘contents of safe deposit box’ and I got excited,” Potash says, “not so much for the monetary value — this is like reuniting with my father.” Potash’s own son Elliot was also on the list and received a check for previously unclaimed funds totaling $398.

State Treasurer Michael Fitzgerald says many other Iowans can find cash and items waiting for them if they check the Great Iowa Treasure Hunt website. Fitzgerald says everyone should check their name because there are thousands of dollars that could be returned to people. More than $33 million in unclaimed property is turned over to the treasurer’s department each year.

Fitzgerald says the state is able to return about 60 per cent of it by getting a name and address from residents. The website is GreatIowaTreasureHunt.gov.