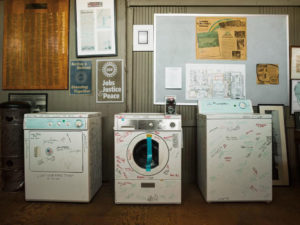 The final appliances made in Webster City were signed by employees.

A documentary chronicling the resilience of a central Iowa town will premiere tonight in Webster City.

The film, “Made in Iowa,” tells the story of how the community was revived after major employer Electrolux shut down its plant there.

Dan Mahoney is spokesman for the company Square, which bankrolled the documentary to spotlight the determination of Webster City’s residents and merchants.

“We were really inspired by the efforts of the community to come together and revitalize their town using small business,” Mahoney says, “and that’s really what this film is about, and profiling that.”

The Electrolux plant, which made washers and driers, closed in 2011. Thousands of jobs were lost and many businesses were forced to close. The film tells the story of how many residents embraced local merchants, including the reopening of the community’s movie theatre. 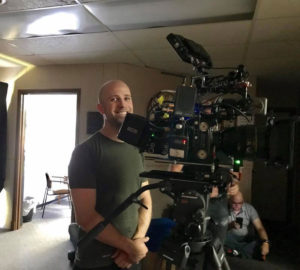 Filmmakers chronicled the rebound of Webster City after the Electrolux plant closing.

“Our in-house creative team worked really hard to look into the story and find the right people to help tell the story of what happened here in Webster City,” Mahoney says. “I think the film will really show that.” The documentary will be showing publicly for the first time tonight at 6 P.M. in the very theater that’s featured in the film.

“For anyone that is local, we would love to have you come down and join us,” he says. “We’re going to be throwing a block party outside of the Webster Theater and just a celebration of what this community came together to do in terms of reopening the theater.”

After the premiere, the documentary will also be available via Twitter and the “Made in Iowa” Facebook page. This is the second film in Square’s documentary series entitled, “For Every Kind of Dream,” which follows the dreams of small business owners.