You are here: Home / Sports / Security stepped up at College World Series in Omaha 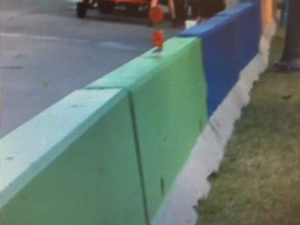 Additional barriers have been added around the stadium in Omaha.

Iowa baseball fans who are headed to the College World Series opening in Omaha this weekend will notice changes around the stadium in light of recent violence and terrorist attacks overseas.

“I won’t say they run a 360-degree circle around the entire T.D. Ameritrade area, but we’ve got almost all of the area covered,” Captain Kyle says. The 4,800, 12-foot-long barriers, known as jersey curbs, don’t restrict the movement of fans on foot or in vehicles.

“It’s provided a barrier between traffic flow and the citizens or pedestrians on the sidewalk,” Kyle says. “It’s just a normal barrier that would divide the street from the sidewalk. There’s a curb there but we’ve enhanced that by putting a jersey curb up on the curb.”

The curbs were brought in for last month’s Berkshire Hathaway stockholders meeting at the nearby CenturyLink Center and they got good reviews. “We did exactly what we’re doing now, we surrounded the CenturyLink perimeter with jersey curbs to protect the citizens,” Kyle says. “We got a lot of positive reinforcement, a lot of good attitudes from the citizens. They felt safer.”

A local art center has already given the barriers a coat of colorful paint for more visual appeal. Omaha has hosted the College World Series since 1950 and the opening ceremonies are Friday night, with the first games on Saturday. Play runs daily through the finals next weekend.