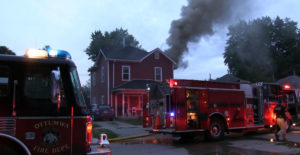 Two women inside this Ottumwa home escaped injury, while the man accused of setting the fire was taken to the hospital.

Ottumwa firefighters say two people were inside and a man was on the roof of a burning home when they arrived at 5:15 this morning.

The alleged arsonist received unknown injuries during the incident and was transported to the Ottumwa Regional Health Center. Police say the man did not live in the home with the victims.

Two women, an adult and a teenager were inside the home when the fire was set. Both managed to escape without any injury. Officials have not released the identities of those involved.

Investigators say charges are expected to be filed later today or over the weekend.