You are here: Home / News / Work underway to repair some Mississippi River locks and dams 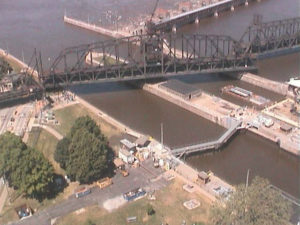 View from a Corps of Engineers camera at Lock and Dam 15.

That’s according to the U.S. Army Corps of Engineers. A project now underway to repair the deteriorating steel and concrete gates at Lock and Dam 15 between Davenport and Rock Island is expected to cost about $15 million.

The Corps says it is focusing on critical maintenance needs right now. Traffic on the river is still moving because one of the locks remains open while the other is being repaired. Making sure locks and dams on the Mississippi alone are working well could represent a transportation savings of $1 billion.