You are here: Home / News / National Weather Service using this week to educate you about lightning 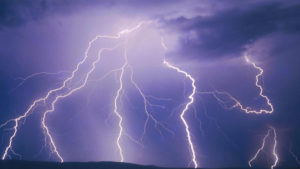 The odds of winning the Powerball jackpot and the odds of being struck by lightning are not about the same. It’s much more likely you’ll be zapped by a bolt from the blue.

This is Lightning Awareness Week and meteorologist Kelsey Angle, at the National Weather Service, says there were no lightning deaths in Iowa last year, however.

“In 2015, we did have two fatalities due to lightning in Iowa,” Angle says. “Really, lightning fatalities are preventable. If you’re outside and you hear thunder, you should seek shelter and get indoors to protect yourself from the risk of being struck by lightning.”

Nationwide, lightning strikes claimed 38 lives last year, which is well below the annual average of 47. He says the two Iowans who were killed were not under or inside a shelter.

Lightning is one of the top three weather-related killers, along with flooding and heat. Be aware of your situation, Angle says, as the weather can change quickly, and be mindful of the forecast.

Angle says, “If you have outdoor activities planned, as you see a thunderstorm approach, that should be your cue of, ‘Where am I going to seek shelter?’ or maybe it’s time to end that outdoor activity or just have a plan of where you would seek shelter if the thunderstorm continues to approach.” If the skies are darkening with clouds, Angle suggests you remember the phrase, “When thunder roars, go indoors.”

“If you have access to a vehicle, if you’re inside a vehicle and you’re in a remote location, that’s going to be a safe place to be to protect yourself from lightning,” Angle says. “If you can get inside a home or a business, those are good places to be, just a sustainable structure or vehicle will protect you from lightning.”

For the record, the odds of being struck by lightning are about one-in-960,000 while the odds of winning the Powerball jackpot are one-in-292-million.