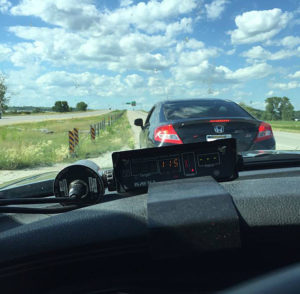 The Iowa State Patrol is reporting another “extreme speed” incident.

A trooper on Sunday clocked a vehicle on Interstate 80 near Council Bluffs going 115 miles-an-hour in a 65 mph zone. A picture of the radar reading and the car that was pulled over was posted by the Patrol to Facebook.

Patrick Hoye, Chief of the Iowa Governor’s Traffic Safety Bureau, says that motorist is not just putting their own life at risk – but many others on the road.

“When a driver is going that fast, there is just absolutely no reaction time for them to stop,” Hoye said. “They’re in and out of lanes…it’s an extremely dangerous situation.” Other motorists who spot another vehicle traveling at such an extreme speed are encouraged to safely report it to police.

“What we ask citizens to do is pull over at the next exit, call the local sheriff’s department and alert them of that vehicle traveling at that extreme speed,” Hoye said. “A lot of times, that’s how law enforcement is notified if there’s no officers in that area.”

In recent months, the State Patrol has posted several photos of traffic stops on Iowa interstates involving vehicles clocked at speeds over 100 miles-an-hour.