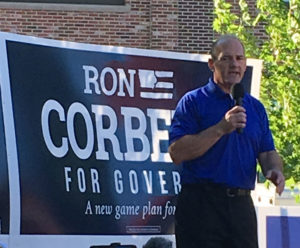 Cedar Rapids Mayor Ron Corbett made it official tonight. He is challenging Governor Kim Reynolds for the Iowa Republican Party’s 2018 nomination for governor.

“We’ve come to the close of the (Governor Terry) Branstad era,” Corbett said. “It’s time to elect new leaders with new ideas that have a new game plan.”

Corbett spoke to a crowd gathered in what has become a thriving neighborhood in Cedar Rapids. In 2008, though, the area was swamped with flood waters. Corbett ran to become the city’s mayor shortly afterwards and led the flood recovery efforts.

“And so it’s today in this resilient city of Cedar Rapids that I stand proudly and announce that I’m going to run for governor of the great state of Iowa and bring a new plan to this state,” Corbett said, to cheers and whistles from the crowd.

Corbett identified what he calls the “core four” issues he plans to address during the campaign. Improving Iowa’s economy, the state’s education systems and the environment are on Corbett’s list, along with a call for “concern” for the state’s citizens.

“And I’m going to tell you: Ron Corbett will have your back if I get elected governor of the state of Iowa,” Corbett said, to applause. “I’ve shown that as mayor.”

Mary Coppock of Cedar Rapids was in the crowd applauding and she picked up a copy of Corbett’s book afterwards.

“I’m thrilled to see him running,” Coppock said. “I think he’s been an amazing mayor.”

Tom Gallagher of Cedar Rapids said Corbett gave Cedar Rapids a “fresh start” after the devastation of the flood.

“I have mixed emotions. I’d like to see him stay in Cedar Rapids. He’s done a great job,” Gallagher said. “If he can do that with the (governorship), that would be fine.”

Governor Reynolds has raised more than a million dollars for her campaign and some in last night’s crowd worried the party establishment will be allied against Corbett, who is not well-known across the state. Corbett promises to be an energetic campaigner, identify the state’s problems and offer solutions.

“I’m a guy of action. I like to get things done. I have ideas, but I’m not so arrogant enough to think that I’m the only person who has ideas,” Corbett said. “…My personality isn’t: ‘It’s my way or the highway.'”

Corbett promised to offer “honest assessments” and “frank discussion” — and he started by questioning the way Governor Reynolds is managing the state budget.

“We have chaos and unpredictability and it’s sad,” Corbett said. “…Their calculator either isn’t working or it’s broken. You can’t keep getting it wrong month after month.”

Corbett, who did not mention Reynolds by name, said borrowing from the state’s cash reserve to balance the state budget is wrong. Corbett suggested the state’s “slow growth status” can be reversed by simplifying the state’s income tax code and reducing taxes on middle income Iowans.

Corbett, who is 56 years old, is a native of Pennsylvania who attended Cornell College in Mount Vernon and made Iowa his home after graduation.