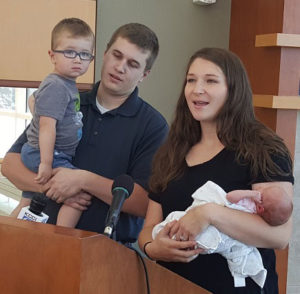 A phone application created in Iowa is helping save the lives of newborn children around the world.

Emily Eekhoff of Waukee was using the “Count the Kicks” app on May 30th to track her baby’s movements and noticed a decrease in activity. She and her husband, Jeremy, rushed to the hospital that afternoon.

“They made the call to do an emergency C-section and when they got her out, her cord was around her neck three times. So, we saved her life by coming that day and by using the app,” Eekhoff said.

Emily held the couple’s three-week-old girl, Ruby, as she and Jeremy spoke at a news conference today at Mercy Medical Center in Des Moines.

“We are super thankful (the app) exists, that we were aware, and we were both on the same page,” Emily said. Jeremy added, “It was a very crazy day. We were actually on our way to see my nephew who was born the same morning, so I left work early, got home, and (Emily) was a little scared because things weren’t right. So, we came (to the hospital) and we’re very thankful that we did.” Emily and Jeremy Eekhoff are both 26 and originally from north-central Iowa’s Hancock County. 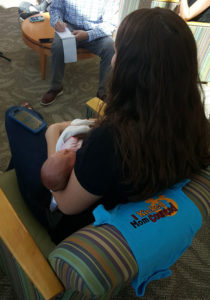 Emily grew up in Garner and Jeremy in Kanawha. In addition to their newborn girl, Ruby, the couple has a two-year-old son, Liam. Emily Price, with the Count the Kicks organization, says the application was launched five years ago.

“This app has allowed us to reach moms everywhere,” Price said. “We are reaching moms as far away as Russia, the South Pacific, the Middle East. We have about 3,000 new app downloads every single month.”

The Count the Kicks campaign was started in 2009 by five Des Moines area mothers who each lost a baby to stillbirth or infant death. Mercy Medical Doctor Neil Mandsager says Iowa’s stillbirth rate has dropped by 26 percent in the five years since the Count the Kicks app was introduced.

“So, there’s no doubt that Count the Kicks was critically important in reducing the stillbirth rate here in Iowa and I’m sure it’s going to do the same across the country and around the world,” Mandsager said. Price says the free app helps mothers count their baby’s kicks during the third trimester of pregnancy.

“Every day, in the third trimester of pregnancy, moms should count at least once a day to see how long it takes them to get to 10 movements. If that amount of time changes, they need to call their provider right away just as Emily did, because a change in the amount of time it takes to get to 10 could be an indication that something is wrong,” Price said.