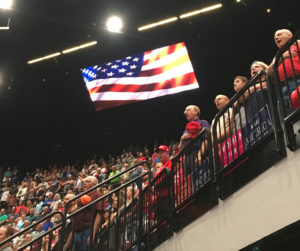 The crowd at the Trump rally.

The chairman of Iowa’s Republican Party says he’s tired of the “Never Trumpers” in the GOP — and Jeff Kaufmann is seeing red when it comes to Nebraska Senator Ben Sasse.

“He crosses the Missouri River and in that sanctimonious tone talks about what he doesn’t like about Donald Trump. You know what, Senator Sasse? I really don’t care what you think. We love Donald Trump!” Kaufmann said earlier this evening.

Kaufmann was a warm-up speaker tonight at a campaign-style rally for the president in Cedar Rapids, Iowa. Kaufmann blasted the media for failing to “stand with Donald J. Trump” and Sasse got the same treatment.

“And if you don’t love him, I’d suggest you stay on your side of the Missouri River,” Kaufmann said, to cheers.

Sasse is scheduled to speak in central Iowa next month. He’s the keynote speaker at a fundraiser for Story County Republicans.