You are here: Home / Fires/Accidents/Disasters / Lawnmower safety stressed after accidents in Iowa increase 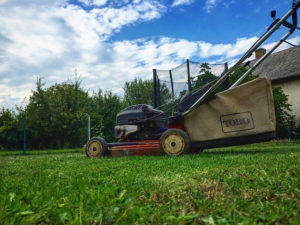 Summer starts today and state health officials are reminding Iowans not to underestimate the power — and danger — of their lawnmowers.

“One is if you’re on a riding mower, it could tip. For example, if you’re going sideways down a slope, it could tip and injure you,” Dr. Quinlisk says. “The next one is when that blade is going around, it could throw up rocks or other things in the area where you’re mowing and you could be hit by that. The third one is the blade itself.”

That sharpened metal blade, spinning around at 200 miles-an-hour, can quickly slice off a finger or a toe. While it’s hot and you may want to dress light for mowing, Quinlisk suggests you don’t skimp on footwear.

“You should have sturdy shoes on. This is not the time to mow with sandals or even bare feet. You want good safety shoes on,” Quinlisk says. “You want to have something to protect your eyes, just in case it does throw some rocks or dirt or something up.”

Many young Iowans make good money mowing lawns in their neighborhoods during the summer but Quinlisk says parents should give serious consideration to their child’s age and maturity level before letting them take off with the Toro.

“If it’s a push mower, usually we say somewhere around 12 to 14 (years old) with some safety instructions prior to using it,” Quinlisk says. “With the riding ones, usually most people say around 16 or older is when that becomes a little bit safer.”