You are here: Home / Fires/Accidents/Disasters / No dead fish found after milk spilled into Adair County waterway 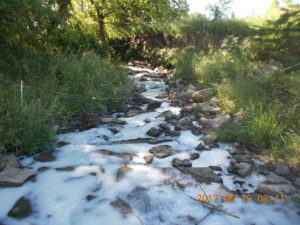 DNR photo of the spill milk in the water.

A survey by the Iowa Department of Natural Resources found no discernible damage to wildlife after a large milk spill in Adair County near Fontanelle.

Dan Olson with the DNR says an accident led to the milk leaking out of a tanker truck into an unnamed tributary which flowed into the Middle Nodaway River. Olson says it created a 50-yard plume in the water, but he found no visible damage.

He says he saw some small live fish, crayfish and insects in the water, but didn’t find any dead fish or other animals. The accident happened along Highway 92 Sunday and Olson says the flow of the water probably helped dilute the milk.

“There was pretty good flow through there — from looking at the banks — I would say it was probably average to slightly higher than average flow,” according to Olson. He says it’s not the milk itself that poses a danger, but the reaction created as the milk breaks down. 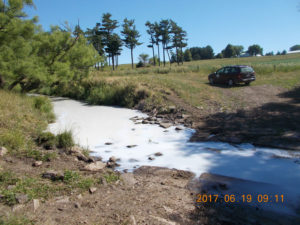 No dead fish were found from the spilled milk.

“I have heard of a couple of other incidents where milk or similar things were spilled in quantity,” Olson says. “But in 15 years hear, this is my first milk spill.” The Wisconsin-based transport company used a vacuum truck to clean up some of the spilled milk from a ditch. Olson says he’s still waiting to see the weight tickets from the vehicles to try and determine exactly how much milk may’ve spilled into the waterway.

The tanker could have been carrying as much as 7,500 gallons of milk.