You are here: Home / News / President Trump tells fans in Iowa his foes ‘don’t get it’ (AUDIO)

President Donald Trump rallied with a exuberant crowd of more than 6,000 fans in Cedar Rapids tonight.

“I was elected to serve the citizens of Iowa and Pennsylvania and Ohio and Michigan and Wisconsin and Florida and all 50 states and all 320 million American citizens,” Trump said and the crowd roared, breaking into a chant of “U.S.A.!”

Trump stood just below a huge American flag, with sign-waving supporters in front and behind him. The president spoke for more than 71 minutes, earning some of the loudest cheers when he blasted the media as “phony” and “fake.” 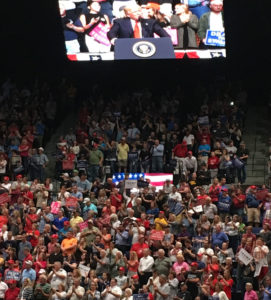 The crowd at the rally for President Trump.

“The truth is people love us, all of us. They love us. They don’t get it. They haven’t figured it out yet. You know, they’re still trying to figure where all those voters came from….We have the hardest working, the smartest people, the toughest people. They’re very lucky that our people don’t protest. Believe me,” Trump said and the crowd erupted with a rumble of cheers. “They’re very lucky.”

Trump’s visit came less than 24 hours after a Republican was declared the winner of a congressional seat in Georgia. Trump ridiculed Democrats for failing to secure a single win in the handful of special congressional elections that have been held this year.

“(Democrats) need to be positive. They can’t continue to be obstructionists. That’s all they have going,” Trump said. “…it would be a beautiful, beautiful thing if we could get together as two parties that love our country and come up with that great health care (plan) and come up with that great tax deal for our people and tax reform and infrastructure and so many other things.”

Just after he landed in Iowa early this evening, Trump visited Kirkwood Community College to focus on high-speed infrastructure. Trump is promising the infrastructure plan he’s working on with congress will provide money to expand broadband coverage that ensures farmers can connect to the internet.

“We have to make sure American farmers and their families — wherever they may be, wherever they may go — have the infrastructure projects they need to compete and grow,” Trump said, “and I mean grow against world competition, because that’s who you’re up against now.”

Former Iowa Governor Terry Branstad flew with Trump on Air Force One from D.C. to Cedar Rapids. Branstad is set to leave later this week for China and his post as U.S. Ambassador.

“Mr. President, first of all I want to congratulate you on your leadership. We’ve been trying to get American beef into China for 13 years and you’ve already got it done!” Branstad said, his voice rising to a shout as the invited crowd at the college cheered. “And there’s more to come!”

Trump called Branstad “a great friend” and a “true legend.”

Trump also called Eric Branstad, the former governor’s son, “very talented.” Eric Branstad is a White House liaison in the U.S. Department of Commerce, a post he took after serving as state director of Trump’s general election campaign in Iowa. Tana Goertz, the Des Moines woman who was the runner-up on Trump’s “Apprentice” TV show 12 years ago, worked on Trump’s 2016 campaign, too. She told the crowd at the U.S. Cellular Center in Cedar Rapids tonight that Trump’s next campaign is well underway.

“Get ready to help us out. We have already got our vision on his reelection,” Goertz said. “We need this guy in the White House for another four years. We need him for eight years. It’ll take about that long to clean up house.”

Trump visited Iowa last December. His rally in Des Moines was part of Trump’s post-election “thank you” tour. Trump’s appearance in Cedar Rapids tonight was his first visit to the state since he took the oath of office.