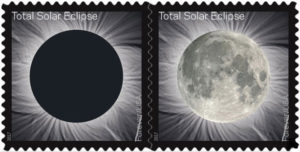 This is the first day of summer and the longest day of the year, an appropriate date for the U.S. Postal Service to release a stamp commemorating the total solar eclipse coming in August.

Mark Saunders, a spokesman for the postal service, says this is a stamp like no other before and it uses a special ink.

“It shows an image of the eclipse, a dark spot of the moon covering the sun, but when you touch the stamped image with your thumb, it transforms into an image of the moon,” Saunders says. “It’s using thermochromic ink. When the image cools, it reverts back to the total eclipse.” The “forever” stamps are available only in full sheets.

“There’s 16 stamps on the sheet and when you flip it over, on the back of the sheet is a map of the U.S. that shows the path of the eclipse,” Saunders says. “It enters in Oregon and exits through South Carolina. There’s 1,100 cities in that 70-mile wide path of the total eclipse.”

Only a tiny corner of southwest Iowa will be under the total eclipse but the rest of the state will have at least a partial view of the rare phenomenon. For best viewing, Iowans may have to travel to Nebraska or Missouri. As for the stamps, they could be in short supply soon enough.

“They’ll be available in post offices for two or three months,” he says. “We printed 60-million of them and once they’re sold, that’s it. We’re not going to produce any more. I recommend getting those stamps as soon as you can. The easiest way is at usps.com.” The total eclipse on August 21st will occur over Iowa shortly after 1 p.m./Central and will last, at most, about two-and-a-half minutes.