You are here: Home / Human Interest / Iowa made Bing candy bar could be featured in ice cream treat 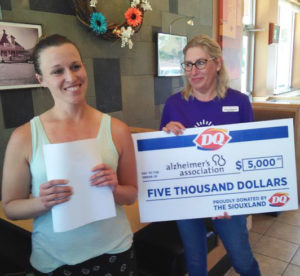 Jeanne Steinkamp of the Siouxland Alzheimer’s Association and Ashley Schoenrock of Dairy Queen.

A candy bar made in northwest Iowa could making its way into one of the items served at Dairy Queen shops across the country.

A new Bing Candy Bar Blizzard was supposed to be introduced locally Wednesday as a fundraiser for the Siouxland Chapter of the Alzheimer’s Association. But, DQ spokesperson Ashley Schoenrock said the company suspended the launch because Dairy Queen has received a large number of inquiries from its restaurants hundreds of miles from Sioux City.

“They didn’t have the product, so they wanted to do some more research on the (Bing Candy Bar Blizzard) and some market research to see where the demand would be to potentially launch it in a greater magnitude throughout the Midwest,” Schoenrock said.

The Bing Bar is made by the Palmer Candy Company, which got its start in Sioux City in the late 1800s. Jeanne Steinkamp, with the Siouxland Alzheimer’s Association, said she was disappointed with the change of plans — but Dairy Queen did present Steinkamp with a $5,000 check for it’s annual “longest day” fundraiser.

“I was not expecting that,” Steinkamp said. “I’m so pleased they wanted to recognized the longest day and support the Alzheimer’s Association and its programs and services.” Schoenrock, the DQ spokesperson, believes the Bing Blizzard will eventually make it into Dairy Queens around the country.

“I don’t how many people I had say on Facebook, ‘bring it to South Carolina, bring it to Texas, I want it in Atlanta.’ It blew my mind,” Schoenrock said. According to the Palmer Candy Company’s website, the Bing Candy Bar was first introduced in 1923.