You are here: Home / Agriculture / ISU study finds most food waste is happening in homes 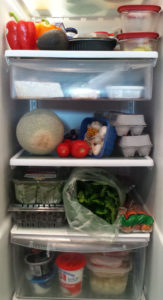 An ISU study finds most food waste happens in homes.

An Iowa State University study finds there’s a good chance the fresh vegetables in your refrigerator will end up in the garbage instead of on your plate and in your tummy.

Ruth Litchfield, an ISU professor of food service and human nutrition, says the average American tosses out 20 pounds of food every month.

Many would tend to blame extreme food waste on industry or retail restaurants, but Litchfield says that’s not the case. “Data tells us the biggest contributor to food waste is right in our own home,” she says. “It’s really at the residential consumer level where a lot of our food waste is occurring. When you find celery or peaches or something in your refrigerator that has a little bit of fuzz on it, that’s considered food waste.”

It’s also a waste to throw out leftovers and she says one goal of the study is to make people rethink what they buy. “Each and every one of us, we’re throwing about 20 pounds of food away a month and that means that’s $1,300 to $2,300 per year,” Litchfield says. “One thing I want people to think about is it’s not just an issue from the hunger standpoint, but it’s costing you money.”

Avoid buying in bulk and overpurchasing, and she says abandon the thought that more is better. Some communities offer composting programs for food, and Litchfield says food that’s converted to compost is waste diverted from the landfill.