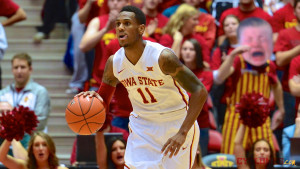 Iowa State guard Monté Morris was drafted by the Denver Nuggets in the second round of the 2017 NBA Draft with the 5st pick.

Morris, the winningest player in school history having played in 100 career ISU victories, is the 38th former Cyclone to be drafted. Iowa State has had 11 players drafted since the Big 12 was formed in 1996-97.

The native of Flint, Michigan, earned All-American honors this past season when he averaged a career-best 16.4 points. He was the only player nationally to average 16.0 points, 6.0 assists, 4.0 rebounds and less than 2.0 turnovers per game.

Morris concluded his career by breaking the NCAA single-season (5.17) and career (4.65) assist-to-turnover ratios. He is just the eighth player in Division I history to lead the nation in a stat category in three different seasons.