You are here: Home / Fires/Accidents/Disasters / Newton man shares story of fall into lake in hopes of preventing drownings 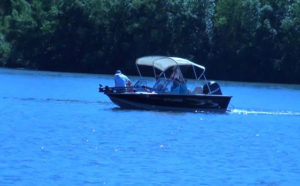 A central Iowa man who nearly drowned while fishing is hoping to convince other outdoor enthusiasts to make water safety a top priority.

John McMahon of Newton is a good swimmer, but four years ago on an Iowa lake, high winds, waves, and a bad decision nearly cost him his life. McMahon had his boat tied to a dead tree as he was fishing alone.

“And the wind came up and my boat started banging into the tree,” McMahon said, “I reach up to grab the limb because I needed to duck under it to untie from it…and over the side I went.” McMahon wasn’t wearing a life jacket. It was in the boat. McMahon began to struggle in the three-foot waves and there was no one around to offer help.

“I had to make a decision, I looked at the shore to see how far it was…I looked at my boat drifting away,” McMahon said. “I made it to the back end of the boat, bouncing around in the waves, trying to figure out how to get back into the boat.” He was eventually able to use the power lift of the motor to raise himself back into the boat.

McMahon knows he was lucky and should’ve been wearing a life jacket. “A life jacket gives you an opportunity to be stupid and still go home,” McMahon said.

This week is “Drowning Prevention Week” in Iowa. State health officials say an average of 37 Iowans die each year from accidental drowning.

Water safety tip from the Iowa Department of Public Health:
· Adults should always provide direct supervision of young children and non-swimmers.
· Formal swimming lessons have been shown to reduce the risk of drowning.
· Coast Guard-approved life jackets can reduce the risk of drowning.
· Don’t mix alcohol with your day on the water. Alcohol affects your judgment, coordination and sense of balance.