You are here: Home / News / Ohio Congressman to give commencement address at Maharishi University (audio) 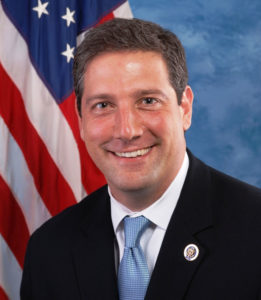 A Democratic Congressman from Ohio who champions the benefits of meditation will deliver the commencement address Saturday at Maharishi University of Management in Fairfield.

U.S. Representative Tim Ryan says he’s hoping to inspire the 500-plus graduates to shake things up as they enter the working world.

“We need a generation of disruptors, people who are going to take calculated risks to really help change our society because we’re stuck right now,” Ryan says. “Our politics are stuck. Our economy is stuck. Our health care system is stuck. What’s happening at Maharishi University is some amazing, innovative things. These kids need to take that and go out and transform the world.”

Transcendental meditation is an important focus for many people in the Fairfield community and Ryan says he’s a big supporter. “I practice a variety of different meditations of which TM is one,” Ryan says. “I also do mindfulness practices, yoga, and some Christian-based meditation. I’m kind of an explorer myself but they’re all very, very helpful.” Ryan organizes twice-weekly meditation sessions for staff and members of Congress, which he calls the “Quiet Time Caucus.”

He says he’s also working to make integrative health techniques, including T-M, more accessible to veterans through funding from the Veterans Administration. “We all need some time for quiet and some contemplation and these are proven to be very, very effective for veterans and school kids and really all of us in the craziness of today’s society.”

After serving in the Ohio legislature, the 43-year-old Ryan is now in his eighth term in the U.S. House. Some might interpret Ryan’s appearance in Iowa, the nation’s first presidential caucus state, as a testing of the waters for higher political aspirations. Ryan says he has no such announcements to make.

Ryan laughs and says, “No, not at this time. I’m very interested in being involved in shaping the national message for the Democrats and trying to get us more focused on an economic message. We’ve got so many people left behind in today’s economy. I’m going to try to do that at the highest level possible. Where that ends, who knows?”

A news release from the university says Ryan will be presented an honorary law degree “in recognition of his lifetime of public service.” Commencement is scheduled for 1 P.M. Saturday. More than 500 students will be graduating from MUM, including 360 who will receive a master’s degree in computer science.