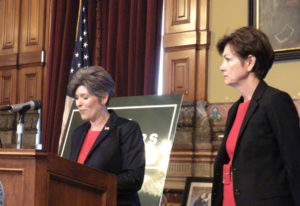 Iowa Senator Joni Ernst is cosponsoring legislation with fellow Republican Senator Marco Rubio or Florida, which she says will help states make better use of federal programs for those trying to get out of poverty.

Ernst, who is from Red Oak, says her travels around the state raised several questions about poverty issues. “How can we help Iowans overcome financial hardships and obstacles? Is the federal government hurting or helping? How can we as a nation do better?,” Ernst says. She says she came to the conclusion that something needs to be done to improve the system.

“The reality is — despite over 80 programs and billion of taxpayer dollars spent annually — the federal governor often fails to address the barriers to self-sufficiency to those living in poverty,” according to Ernst. Ernst says she learned when she was still a state senator that the federal programs designed to help those in poverty can often end up being part of the problem. She cited a woman she met in Lenox who was getting assistance and had to make a tough decision about getting a promotion at her job at a care center.

“This young women went home and calculated what her pay increase would be along with all the government assistance she would lose. What she figured out, is that taking the promotion would actually cost her 200 dollars a month,” Ernst says. Ernst says the woman decided to go ahead and take the promotion and deal with the lost of funds to support her family. Ernst says her legislation gives state the flexibility to review and revise the programs to ensure those trying to improve themselves don’t fall off a cliff when their federal support levels go down.

“The Empowers Act would allow states to apply for four-year temporary waivers to integrate and reform two or more federal programs that assist folks in need,” Ernst explains. Iowa Governor Kim Reynolds joined Ernst for the announcement of the legislation. Reynolds says too often the federal money comes with a one-size-fits-all approach that makes it tough to mesh with state programs.

“It’s nearly impossible for the two efforts to align despite having the same goal — and that goal is to empower Iowans and reduce poverty,” Reynolds says.

Reynolds says the system ends up with state organizations working in their own “silos.” If the bill becomes law — she would ask all her department heads to find opportunities to use it to help Iowans.

“Have them look at the opportunities that we have in front of us and see if collectively the can figure out a way to really break down those silos and take the flexibility that we have and to coordinate that in a better manner,” Reynolds says. “To really work smarter, to find ways to work smarter and serve more Iowans.”

Ernst says the states that get waivers would get the same amount of money that other states get for the same programs and would be required to put any savings back into programs to help people in poverty.