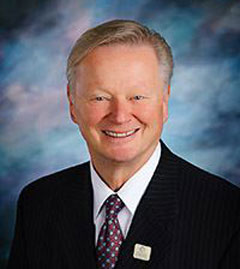 At least three Iowans are among nearly 300 of the top elected leaders from cities across the country who are gathered in south Florida for the U.S. Conference of Mayors.

Dubuque Mayor Roy Buol says they’re covering a range of important topics. “There are a lot of issues that are going to be effecting Dubuque and a lot of them are infrastructure-related,” Mayor Buol says. “Certainly, the question of health care and how that whole debate is going to unfold will have a real impact on cities across the country.”

Many cities have overwhelming needs right now, according to Buol, and he says it’s time for the federal government to get an infrastructure bill passed so vital projects can get underway. “We’ll have different things throughout the year where we’re meeting with federal legislators, state legislators on some of these same issues,” Buol says. “It’s really to bring awareness and also to let them know what cities need and what are the best ways we can partner with the federal government to get those things done.” Buol is in his 12th year as mayor of Dubuque.

Waterloo Mayor Quentin Hart says they were able to talk with an administration official about community development block grants and their importance to cities for making infrastructure improvements. He says now it’s up to Congress to pass the bill with funding.

“We know it’s coming, when its’ coming that’s another story. So, we’re hoping that there is bipartisan support to move that infrastructure support to our communities,” Hart says. He says it appears the administration supports rebuilding infrastructure, and in funding beyond the community development block grants.

“They were talking about not just providing infrastructure dollars –but also providing cities for dollars for upkeep. Because, ten years, 20 years down the road down the road, we will need to replace things and do certain things. They were talking about — I think they said 16 percent of all infrastructure things comes from out federal government,” Hart says. Hart says many mayors feel they could use even more federal support.

“Of course we’d like to see that number go higher and higher — that’s what we are hoping for — that’s what the push is,” Hart says. He says the infrastructure needs vary widely between cities, from Los Angeles which could use help in building public transportation, to Waterloo which needs help with repairing bridges and its water treatment plant.

“We will be continuing reaching out, trying to find every avenue, and trying to make our message heard to the current federal administration to try and support some of these needs that we have,” according to Hart. Hart says the infrastructure issue is one where politics are put aside, as all mayors have needs and understand what their counterparts are going through. He is in his first term as mayor of Waterloo.