You are here: Home / Fires/Accidents/Disasters / Woman rescued from the Turkey River after getting stuck on log 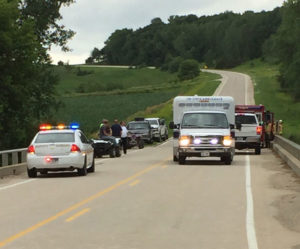 A Sumner woman was pulled from the Turkey River after her inner tube got stuck.

Police have released more information about a river rescue in northeast Iowa on Friday.

Fayette County Sheriff’s deputies, firefighters, and other rescue personnel were sent to a bridge along the Turkey River near Hawkeye at 2:20 p.m. and found a woman sitting on a log that was wedged against the bridge.

Officials say 51-year-old Teresa Marie Dane of Sumner had been tubing when she became stuck in the river. Dane was pulled from the water and was not injured.