You are here: Home / Crime / Courts / ‘AK-47 Bandit’ who robbed Mason City credit union may be in custody 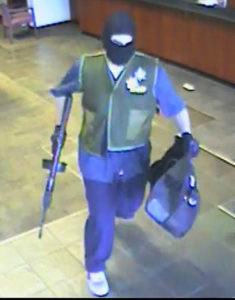 A notorious criminal who robbed a Mason City credit union two years ago and committed other crimes in Nebraska and across the western United States may be in custody.

In 2012 and 2014, a man the FBI called the “AK-47 Bandit” robbed several banks, as well as shot and wounded a police officer in Chino, California. 39-year-old Richard Gathercole was arrested last week in Dawson County, Nebraska after allegedly firing shots from an AK-47 rifle at a Kansas state trooper.

FBI Los Angeles spokeswoman Laura Eimiller says numerous agencies are investigating whether evidence found in the search of a Roundup, Montana home is linked to the suspect.

A jailhouse phone call transcript submitted to a judge by federal officials seeking a search warrant for the Montana home shows Gathercole asked his mother a few days after his arrest to clear his home of guns.

Federal agents say homemade bombs were found at the home. Court documents show that Gathercole is accused of stealing $126,000 from the Iowa Heartland Credit Union in Mason City on July 28th, 2015 after informing tellers he had a “pressure bomb.”