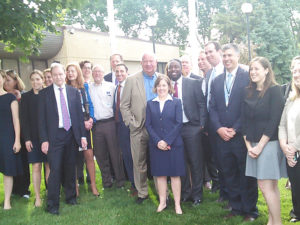 The trial in the defamation lawsuit filed by Beef Products Incorporated seeking $1.9 billion from ABC Broadcasting and reporter Jim Avila came to an abrupt halt this morning with a settlement.

Judge Cheryle Gering began the day by informing the jury they were done with their work.

“The case is settled. As permitted under the law of South Dakota, neither the court, the jury or the public will be told of the terms of the settlement today,” Gering said.

Today’s settlement comes after the jury was sent home Tuesday morning because of what Gering called a “major legal issue” that came up after court adjourned following Monday’s testimony. BPI Attorney Dan Webb said the settlement vindicated the company’s lean finely textured beef product that Avila and ABC News reports had referred to as “pink slime.”

“We are extraordinarily pleased with this settlement,” Webb said. “It’s been a long road for BPI, but it is a road that was necessary…in order to rectify the harm that was caused by what we believe to be baseless and biased reporting that occurred in 2012.”

“We have established that this product is beef, it’s nutritious, it’s safe and it should be a component of ground beef,” Webb said. “And, by having this trial and getting this settlement, we are convinced that now the company — with this behind them — can go forward, can grow the business.”

BPI’s founder and CEO Eldon Roth declined to comment, but ABC Reporter Jim Avila spoke with the media after the settlement was announced.

“I think it’s important to note that we are not retracting anything and we are not apologizing for anything,” Avila said. “And I also want people to understand that I understand that it was a business decision and I support my company. And that is all I can say at this time.”

Avila added that he will return to work for ABC News next week. He had been in court every day for the three and a half weeks of the trial in Union County district Court in Elk Point.

Depositions played for jury in BPI defamation suit against ABC